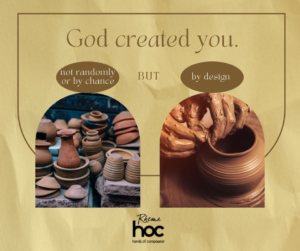 26 Then God said, “Let us make human beings in our image, to be like us. They will reign over the fish in the sea, the birds in the sky, the livestock, all the wild animals on the earth, and the small animals that scurry along the ground.”

In the image of God he created them:

male and female he created them.

28 Then God blessed them and said, “Be fruitful and multiply. Fill the earth and govern it. Reign over the fish in the sea, the birds in the sky, and all the animals that scurry on the ground.”

29 Then God said, “Look! I have given you every seed-bearing plant throughout the earth and all the fruit trees for your food.

30 And I have given every green plant as food for all the wild animals, the birds in the sky, and the small animals that scurry along the ground – everything that has life.” And that is what happened.

31 Then God looked over all he had made, and saw that it was very good!

And evening passed and morning came, making it the sixth day.

You are not inferior to anyone else because of your race or gender. God is not a white male as many of us might have assumed (I still have a mental picture of God as an old man with a grey beard – a kind of father christmas without the red suit!)

When God looked at what He had created, He saw that it was very good!

God has not created you to live in isolation. He has created us to live in a community, having healthy, life affirming relationships with others. We all need fellowship and companionship. Please choose your friends wisely.

15 The Lord God placed the man in the Garden of Eden to tend and watch over it.

16 But the Lord God warned him, “You may freely eat the fruit of every tree in the garden –

17 except the tree of knowledge of good and evil. If you eat its fruit, you are sure to die.”

18 Then the Lord God said, “It is not good for man to be alone. I will make a helper who is just right for him.”

19 So the Lord God formed from the ground all the wild animals and all the birds of the sky. He brought them to the man to see what he would call them, and the man chose a name for each one.

20 He gave names to all the livestock, all the birds of the sky, and all the wild animals. But still there was no helper just right for him.

21 So the Lord God caused the man to fall into a deep sleep. While the man slept, the Lord God took out one of the man’s ribs and closed up the opening.

22 Then the Lord God made a woman from the rib, and he brought her to the man.

“This one is bone from my bone,

And flesh from my flesh!

She will be called ‘woman,’

Because she was taken from ‘man.’”

24 This explains why a man leaves his father and mother and is joined to his wife, and the two are united into one.

25 Now the man and his wife were both naked, but they felt no shame.

It is very interesting that just a few chapters later in Genesis 6, God was sorry that He had created people and put them on the earth because He observed the extent of human wickedness. It broke His heart.

5 The Lord observed the extent of human wickedness on the earth, and he saw that everything they thought or imagined was consistently and totally evil. 6

So the Lord was sorry he had ever made them and put them on earth. It broke his heart.

7 And the lord said, “I will wipe this human race I have created from the face of the earth. Yes, and I will destroy every living thing – all the people, the large animals, the small animals that scurry along the ground, and even the birds of the sky. I am sorry I ever made them.

8 But Noah found favour with the Lord.

My prayer is that we will not break God’s heart. He will not regret creating us. Let us live in a way that brings honour to Him, reflecting His nature. In His image. Fearfully and wonderfully made.