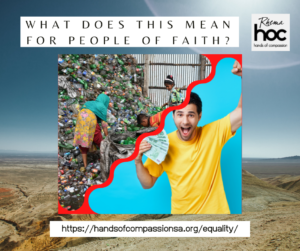 South Africa is one of the most unequal countries in the world. Sadly, the gap between the rich and the poor is widening and sadly this looks likely to continue for some time. It is the responsibility of the church and other faith-based organizations to be models of equity. Equality brings dignity and justice.

Every human being has been created equally in the image of God irrespective of their race, religion, economic status, gender, or sexual orientation. Every person is entitled to be treated with respect and dignity. We are all equal and should strive to create structures in our religious and secular institutions which reflect and promote this equality.

This was such a radical concept at the time Paul wrote it. Society was strictly divided along ethnic, economic, and gender lines. This scriptural principle of equality was used as a baptismal formula in the early church. Can you imagine a slave owner and a slave being baptized together as equals? Men and women regarded as equal children of God? What a beautiful picture of how God has created us and what he desires our families, churches, and communities to look like. God is neither male nor female, and we reflect him poorly when only one gender is represented. The image of God is distorted by inequality.

But if you favor some people over others, you are committing a sin. You are guilty of breaking the law.

Prejudice is a sin. Truth be told. Finish and klaar (as we say in South Africa!)

What prejudices do you still have? Who do you look down on? Can you reach out to someone who is different from you?

We are all in this together, and together we can create a more just and equitable society.